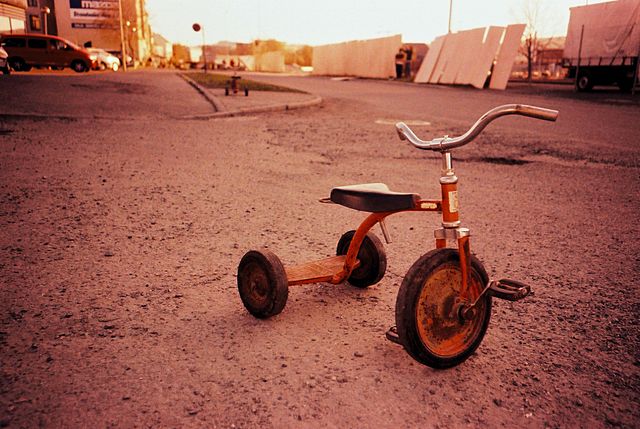 Today we want to turn to Richard Rohr for the first time. There is much, much to speak to, but our first point will be regarding the thing he terms “dualism” and frames as a thing which does not account for actual truth and reality, preferring, what he terms “both-and thinking”, and, primarily, part one of his “Alternative Orthodoxy”, i.e. the methodological tricycle. As it felt easier, we wrote this one in English, but are quite determined to get some of this stuff into German as well.

In the tricycle, three “wheels” are are employed for determining truths about God, Man and the world. These are “Scripture as validated by experience, and experience as validated by Tradition are good scales for one’s spiritual worldview”. Far from being a new thought or even an ancient “truly” Christian idea, only emerging now, this is clearly heavily borrowed from the so called three-legged stool of Anglicanism (see here and here for example), which stands on scripture, reason and tradition, though here also the second has for a while been exchanged for that elusive term „experience”. And we won’t even start getting into the Wesleyan Quadrileral. So the first point to note is: this tricycle idea is not in any way original to Rohr’s thinking. It is also NOT the secret way true Christianity has always thought if it had not been suppressed by old white men. Remember that WHENEVER you read Rohr.

Now, one central reference point here is an (aged) interview with Rob Bell, in which both men sound like they find it hard to understand why experience has hitherto (seemingly) been excluded from determining truth about God, as scripture and tradition also are experienced and you have nothing at all without experience (duh!). Unwittingly, they here lay their finger on the fundamental flaw in their triumvirate, namely a category mix-up (the same kind of error we diagnosed in Bart Ehrman’s cristicism of Lewis Trilemma).
To wit: Scripture and Tradition are the same category, namely sources of knowledge about God, or sources of divine revelation. Even „reason“ is already misplaced here as a third source. We can show this by posing certain questions: Scripture and Tradition would be two of several possible answers to the question:

Where does God reveal himself?

Where do I get knowledge about God?

To define these sources more concretely, we could say for scripture: “The direct revelation of God to prophets and Apostles and through Jesus”. Tradition would be „The divine self-revelation of God through the decisions and conclusions of his church”, in the Roman tradition also called the teaching office. Now it already becomes clear that reason – of both individuals and groups – has already played a part here in the decisions of councils in their exegesis etc. And, if we dig deeper, we find it is also being employed the apostle Paul, for example, and throughout the writings of the New Testament as well as the Old.

So reason is not a source of divine revelation, but a means of understanding the same, thus a means of receiving it. In a way it’s like listing

and c) my eyes

as my three favorite sources for news.

Now „experience“ tops reason with regards to its generality. In every conscious moment we „experience“ so no revelation – divine or otherwise – can come to us apart from „experience“. Reason also only exists in the conscious mind, which reflects on the data entered into the self via „experience“, which then is itself an experience in its turn. In fact experience includes every possible source of knowledge revelation or everything. It’s like answering the question “Where do you like to go for breakfast” with “In a state of existence”. To add other sources more honestly, one would have to translate “existence” into “What other people tell me.”, “General philosophical developments”, “Fox News!!!”, or “The visions and emotions that come to me in deep trance”. All these are sources that are identifiable. “Experience” INCLUDES scripture and tradition and can hence not be in the same category as them. Shoddy thinking does not deserve congratulation, even if it is selfcongratulation.